Last week, I asked what you thought about making Swipe File a daily newsletter. A number of folks responded and, though it was close, most people prefer a weekly digest.

Thanks for taking the time to provide your feedback. So let's get to it — here's your weekly update.

Enjoy, and if you're feeling inspired, pass it on.

Build something users love via @sama

I've been listening to YC's How to Start a Startup class — which I highly recommend — and found this nugget that I felt applied as much to content marketing as it does building a startup. 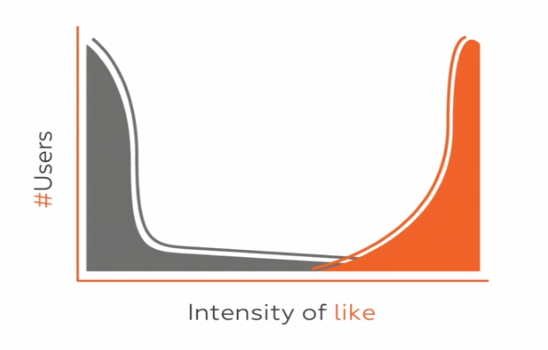 The entire series is worth checking out but this excerpt is from the first course, around 17 minutes.

It's the same principle I talked about it Big Wins for Content Marketing when I said, "Choosing a narrow audience means I can deliver value to a small group."

In business and writing, start small but think big.

On the Value of Hard Focus via Cal Newport

In So Good They Can't Ignore You, Cal Newport discusses the opportunity of deliberate practice for knowledge workers. He argues that hardly any knowledge workers actively train to improve their skills, meaning you can distance yourself by investing even a small amount of time in training.

This short post on his blog gets to the same point. If you haven't had a chance to read his book, this is a good primer.

[Writer Haruki Murakami's] suggestion is to “sit down every day at your desk and train yourself to focus on one point.” To Marukami, training to write for four to five hours each morning was no different than training for the marathon that he’s run every year for the past two decades.

How to Do What You Love via @paulg

Here's a great post from Paul Graham's essay archive on doing what you love. It's an honest look at finding meaning in your work and playing the long game.

But the fact is, almost anyone would rather, at any given moment, float about in the Carribbean, or have sex, or eat some delicious food, than work on hard problems. The rule about doing what you love assumes a certain length of time. It doesn't mean, do what will make you happiest this second, but what will make you happiest over some longer period, like a week or a month.

Pro tip: Paul's essays are pretty long. I've been using the Send to Kindle browser extension to read his articles on my Kindle.

Stewart Butterfield of Slack: Is Empathy on Your Résumé? via @nytcorneroffice

This is short interview with Slack founder Stewart Butterfield that gets to some really big ideas. Take, this excerpt, for example — one of the fastest growing tech companies in the world cancelled all of their recurring meetings.

It's that type of focus and deliberate practice that drives Stewart and Slack.

People can go to work every day for a year and not really get anything done because they’re just doing the things that they felt they were supposed to be doing. We just went through this process of canceling almost every recurring meeting that we had to see which ones we really needed. We probably do need some of the ones we canceled, and they’ll come back — but we’ll wait until we actually need them again.

All of us struggle to maintain work-life equilibrium. Technology is so pervasive that we have to fight its nagging call at all hours of the day.

Dave Eggers take a really hard look at where the world is heading if we spend too much time engaged in the online world without disconnecting. The Cirle is the story of fictitious company that feels suspiciously like an evil version of Facebook or Google. The book chronicles the journey of Mae Holland, a woman who gets so carried away with technology that she loses all touch with reality.

Wired called it "tone-deaf" but I call it a worthwhile reflection on our future. The narrative is obviously dramatized but it feels just real enough to make you think twice next time you open up your Facebook news feed.

The Problem with Habit-Forming Tech in Marketing

A few hundred years ago, sugar was essentially absent from the human…

Hey All, I've been playing with the idea of making Swipe File…